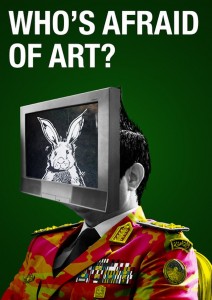 In the immediate wake of the 2011 Tahrir Square uprising, the Egyptian graphic designer and comic creator who goes by Ganzeer gained notoriety as a street artist, painting murals of protesters who had died in the struggle. But in the tumultuous years that followed, he was forced to flee the country after being labeled a “terrorist” because he dared to criticize current President Abdel Fattah el-Sisi through his art.

Now living in New York, Ganzeer is producing a dystopian sci-fi webcomic, The Solar Grid, which draws on that experience as well as other current issues such as whistleblower data leaks, surveillance, environmental havoc caused by human works, and crowdsourced opinion-forming. Two chapters have been published online already, with seven more to come.

The 2014 cartoon of Sisi shown here is the one that led government-connected TV presenter Osama Kamal to denounce Ganzeer as a “recruit of the Muslim Brotherhood.” The piece has since been taken down from the artist’s website, but when posting it he also predicted that Sisi would “turn Egypt into a police state.” That statement turned out to be prescient, what with the arrests this year of cartoonists Islam Gawish and Makhlouf, an official investigation of satirical puppet Abla Fahita for “violating public modesty,” and a two-year prison sentence for author Ahmed Naji on the same charge. Ganzeer tellsThe Guardian’s David Batty that he’s certain there is no way he could freely return to Egypt now “unless I’m willing to change my position and say I support Sisi and I think he’s the best.”

Instead, he hopes to continue driving the cultural conversation forward–his chosen nickname Ganzeer means “bicycle chain” in Arabic–with the highly topical issues in The Solar Grid. While the comic’s theme of environmental destruction caused by humans naturally calls to mind climate change, for instance, Egyptians will also recognize an echo of the Aswan High Dam, which was vaunted as an economic driver and a triumph of engineering when it was built in 1970 but soon ruined the fertile croplands of the Nile Delta, which no longer benefit from the natural flood cycle and its new deposits of silt.

While much of The Solar Grid is naturally informed by Ganzeer’s own experiences in Egypt, it also deals with issues that are universal in our current technological age. One subplot deals with a Snowden-like government whistleblower, and future chapters set on Mars depict a direct democracy where some citizens choose to outsource their vote to an AI that makes decisions by algorithm. Acknowledging it’s an expansive and ambitious project, Ganzeer explains that he doesn’t have “a specific subject matter that I’m concerned with – other than that there are some really fucked up things about the world that I really don’t like and want to comment on.”