In the face of international condemnation and ridicule, Facebook reversed course Friday after initially blocking one of the most famous war photographs of all time because it includes a nude minor. Taken by photographer Nick Ut, the Pulitzer Prize-winning photo titled “The Terror of War” shows nine-year-old Kim Phuc, along with other South Vietnamese children and soldiers, fleeing a friendly-fire napalm attack in 1972. Phuc sustained severe burns across her back, and the searing image helped to turn U.S. sentiment against the war, contributing to the ceasefire six months later.

The 44-year-old photo came to Facebook’s attention last week when Norwegian writer Tom Egeland included it in a post about “seven photographs that changed the history of warfare.” Egeland’s account was subsequently suspended, prompting the newspaper Aftenposten to cover the story and use the same photo as a preview image on Facebook. The newspaper in turn received a moderation notice asking that it “either remove or pixelize” the photo, but the post was deleted by Facebook before Aftenposten staff could take action. 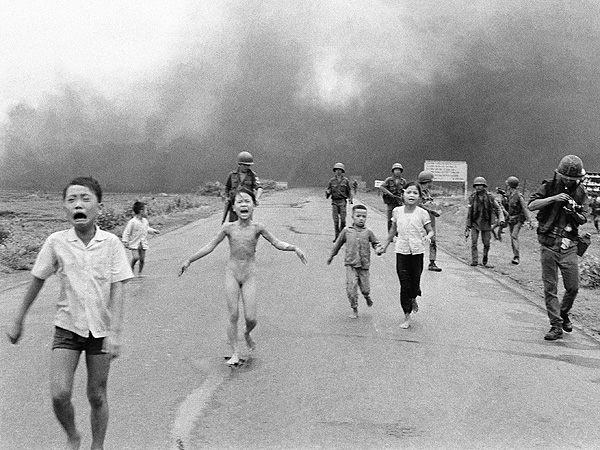 In any case, said the newspaper’s editor Espen Egil Hansen in an open letter to Mark Zuckerberg, he was not about to comply with the censorship request:

Mark, please try to envision a new war where children will be the victims of barrel bombs or nerve gas. Would you once again intercept the documentation of cruelties, just because a tiny minority might possibly be offended by images of naked children, or because a paedophile person somewhere might see the picture as pornography?

Facebook’s Mission Statement states that your objective is to “make the world more open and connected”.

In reality you are doing this in a totally superficial sense.

If you will not distinguish between child pornography and documentary photographs from a war, this will simply promote stupidity and fail to bring human beings closer to each other.

Indeed, in an initial response to the uproar on Friday a Facebook spokesperson ludicrously claimed that “it’s difficult to create a distinction between allowing a photograph of a nude child in one instance and not others.” Norwegian Prime Minister Erna Solberg then shared the photo on her own Facebook page; when it was promptly deleted, she reposted it with a black censor bar along with snarkily censored versions of other iconic photos including the Tiananmen Square “Tank Man” and Martin Luther King delivering the “I Have a Dream” speech.

By mid-afternoon on Friday, Facebook finally relented and issued another statement to announce that the uncensored photo will now be allowed on the site:

An image of a naked child would normally be presumed to violate our community standards, and in some countries might even qualify as child pornography. In this case, we recognize the history and global importance of this image in documenting a particular moment in time.

Although the struggle over this particular photo ultimately reached a positive resolution, it follows a pattern that seems to be repeated every week: a controversial image is removed due to Facebook’s overly rigid content guidelines or a misapplication of said guidelines, an uproar ensues, and in some cases the story attracts enough attention that the social media giant is forced to reconsider. Invariably this happens only when the censored party has enough followers and/or dedication to launch an attention-getting campaign through social or traditional media, since a formal appeals process is virtually nonexistent on Facebook. Hansen outlined this difficulty in his letter to Zuckerberg:

Today, if it is possible at all to get in touch with a Facebook representative, the best one may hope for are brief, formalistic answers, with rigid references to universal rules and guidelines. If you take the liberty to challenge Facebook’s rules, you will be met – as we have seen – with censorship. And if someone will protest against the censorship, he will be punished, as Tom Egeland was.

Interestingly enough, Facebook seems to have finally acknowledged that its Community Guidelines on nudity sometimes snag non-sexualized images–only to hint that there’s no point in contesting the decision. The standard moderation message sent to Aftenposten ends with a newly-added disclaimer: “We understand that these limitations will sometimes affect content shared for legitimate reasons, including awareness campaigns or artistic projects, and we apologize for the inconvenience.”

Here are just a few previous examples of overreach in Facebook’s content moderation: