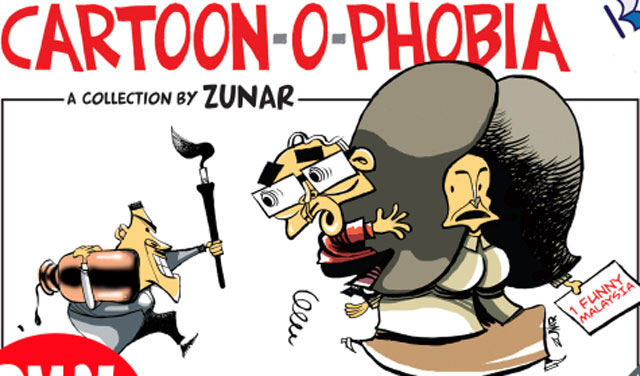 Malaysian political cartoonist Zunar won a long-awaited victory this week when a High Court judge agreed he was entitled to compensation for books and original art seized by police in 2010. Although the judge awarded him 18,000 Ringgit (about $4,000) for lost income, Zunar said he was even more gratified by the court’s acknowledgement that “the confiscation of cartoon artworks and books under laws such as the Sedition Act is a gross violation of a cartoonist’s rights to freedom of expression.”

Despite the significant victory, Zunar still faces a total of 10 counts of sedition which could net him well over 40 years in prison. His trial on the first nine charges has been delayed numerous times since February 2015, and last year he also was banned from leaving the country until the case is resolved. He has challenged that restriction, and a judge may issue a decision on it tomorrow.

The judgment issued by the High Court this week concerned the police seizure of 66 copies of Zunar’s book Cartoon-o-Phobia just before a sales launch event in 2010. Police finally returned the books in 2015 after a previous court decision, but Zunar continued to push for compensation over lost sales and damage to an original collage that they also seized. Despite this victory, he reports that police are still holding 40 original cartoons and 1,300 copies of his books taken in other raids.

Zunar’s first nine sedition charges stem from statements that he made on Twitter in February 2015 following the sentencing of opposition leader Anwar Ibrahim on a trumped-up sodomy charge. The cartoonist hinted that the judiciary in that trial had been subject to political pressure or bribery, observing that “the lackeys in black robes are proud of their sentences. The reward from political masters must be plenty.” He then exchanged Twitter barbs — and a cartoon — with Inspector-General of Police KhalidAbu Bakar as officers were en route to arrest him.

← What Do We Know About the Top Ten Challenged Books of 2016?
Signed Premiums from Neil Gaiman, Robert Kirkman, Jonathan Hickman, & More Benefit CBLDF! →