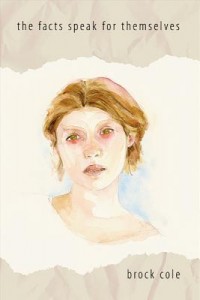 The principal at Fort King Middle School in Ocala, Florida may have pulled YA novel The Facts Speak for Themselves by Brock Cole from the library without following the official district book challenge policy. The initial report from Spectrum News 13, cites a 14 year old girl bringing the book home and alerting her parents to words she felt were too mature for her, after which the principle supposedly pulled the book on January 23, 2018.

A later report from Fox 51, on January 25 makes it clear the book is still in the possession of the parents who complained about it. The report begins:

Fort King Middle School parent Deny Lammardo has to skip some words while reading excerpts from a book her 8th grade daughter brought home from the school’s library.

And when Kevin Christian, Marion County Schools spokesman, was questioned regarding the volume, he noted,

Regardless of what happened with the book itself, both reports make it clear that the parents who found fault with it, and the principal who removed it, all failed to follow the clear protocol for a book challenge at Marion County Public Schools.

The procedure, which is laid out online, requires a form which “is available in each school office or Superintendent’s office” to be filled out including:

Skipping the formal complaint, might not seem like a huge deal, although the language in the policy does clearly state that “A complainant who does not complete and return the form shall receive no consideration.” The formality of it is likely there to make sure these complaints are taken seriously and dealt with responsibly.

a committee of teachers, educational media specialists, and other
qualified personnel shall be appointed by the principal to evaluate the
challenged materials and to make recommendations of any changes.

The committee then has 15 working days to read and reevaluate the material, taking special care to consider the objections of the complaint, and report the decision to the Superintendent.

These guidelines are in place so that it does not fall on the principal alone to have to make this decision, but instead to a qualified group that will take into account a full reading of the text and judge the complaints merit accordingly. As per the first report from Spectrum 13, the book may have been pulled due to the principal “finding out it had been pulled in other districts.” That kind of knee-jerk reaction doesn’t take into account the student’s First Amendment rights, and can even create a loop by which other well-intentioned individuals hearing this principal banned the book will do the same thing, without individual investigation, or proper challenge procedures, and the cycle repeats from there ad nauseam.

The Facts Speak for Themselves was a National Book Award finalist. It is a narrative from the perspective of a 13 year old girl, Linda, who witnesses a murder and then details her life with an irresponsible mother, and the string of gross boyfriends the mother had. When respected YA author Lois Metzler reviewed it for the New York Times, she said, “Brock Cole has found the perfect tone for this very raw and very real novel.”